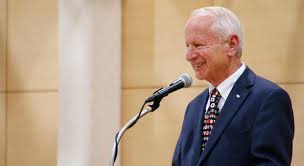 Davis co-founded the scholarship program in 2000 along with Phil Geier, former President of UWC-USA. Once UWC graduates enrol in one of the Program’s partner U.S. colleges or universities, the Program provides financial support for their undergraduate educations through institutional grants that support need-based scholarships. Originally, the scholarship was offered to students matriculating at one of five colleges in the United States: the College of the Atlantic, Middlebury College, Colby College, Wellesley College and Princeton University. The network of eligible universities has since grown to 95.

The scholarship is unusual as it is restricted to students who have already faced heavy competition, in their penultimate year of high school, to be accepted to, and to complete the International Baccalaureate Diploma Programme at, one of the 18 schools or colleges in the United World Colleges (UWC) movement. UWC is an educational movement including 17 sixth form colleges (upper-level secondary schools) and full schools located throughout the world that educate international students from 160 countries, with a focus on peace and sustainability. The schools and colleges offer partial and full scholarships permitting talented students of all socio-economic backgrounds to attend.